The debate about steel vs composite toe caps has been ongoing for a while now, so, with still no conclusive evidence that either is better than the other, is there, in fact, a superior option?

What are safety boots? According to Wikipedia, “A steel-toe boot (also known as a safety boot, steel-capped boot or safety shoe) is a durable boot or shoe that has a protective reinforcement in the toe which protects the foot from falling objects or compression, usually combined with a midsole plate to protect against punctures from below”

Steel toe caps have been around for a long time – since the start of the 20th Century when the usage of safety workwear and footwear first became recognised as a need – previously to this, it was actually considered more expensive to implement proper safety footwear and other measures than replace an injured operative! However, when liability costs were introduced after the laws regarding compensation were implemented, this theory and practice began to change. Safety Standards in many countries means that nowadays, the use of safety boots in many industries is compulsory.

The first type of safety footwear was a type of wooden shaped and hollowed out boot, named a “sabot” which protected workers from heavy falling objects.

Allegedly, the word “sabotage” came from the industrial revolution when workers used their sabots to wreck machinery!

Unlike much other safety workwear, safety boots have tended to follow trends and fashions, – for example the need for ladies safety boots – with manufacturers obliged to produce varying styles of footwear to meet consumers expectations and wants.

While steel toe capped boots have been around a long time – since the 1940’s – composite toe caps are a relatively new introduction into the world of safety footwear. so what makes them better? Or are they even inferior to steel toe caps?

Why use composite toe caps?

For many people wearing toe capped boots on a daily basis, the weight and comfort of your boots matters to them. Not only are composite toe caps lighter than steel, but they are also more durable. Composite toe caps can be made from a variety of materials, and will differ from supplier to supplier, however, the most used materials will usually be kevlar, fibreglass, plastic, and carbon fibre.

Composite toe caps are lighter for a variety of reasons – but primarily because of their production process – nanotechnology creates thin layers of fibre that is then fused together to create a strong but thin cap. Some further features and benefits of composite toe caps for lightweight safety boots are below.

Why use steel toe caps?

Steel toe caps are still the most popular option in today’s market for safety boots and shoes. With new advances, they are near as light as composite toe caps too. They are proven too – having been around for the best part of a century, steel toe capped boots are not going away anytime soon and have provided operatives and workers with proper protection for many years.

There is a common myth surrounding steel toe capped boots that they are more likely to cut off and crush your toes should a significantly heavy enough weight fall on them. This myth has, however, since been proven to be false, with a popular US TV Show testing safety boots to try and prove the theory. They came to is that it would only be under extraordinary circumstances that a heavy enough weight would fall on your toes and cause damage, and if the damage was caused, it would more likely crush your toes rather than cut or slice them. There has only been one incident of this before in Australis, where a worker had some steel pipes fell off a forklift and crushed a worker’s toes. It was also found that rather than a direct amputation of the toe, it was the crushing of a toe that meant it was beyond repair. Some further features and benefits of steel toe caps are below:

If you’re making a decision on whether or not to opt for either a steel or composite toe cap, we’ve put together a helpful chart with the pros and cons of each boot together for you.

What we must remember when making a decision on purchasing or recommending safety boots is that both steel and composite toe caps have all been subjected to and met certain standards. In short, they are all fully compliant to a set of standards, and it should be borne in mind that checking the specification you need is very important.

Where there are generally more benefits associated with composite toe caps, it has been proven that the widely held myth that they are safer than steel toe caps is, in fact, false and not to be held in your mind when ordering safety shoes. Overall, the composite toe cap offers the benefits of the steel toe cap plus more, such as its resistance to the conductivity of heat, cold and electricity, so if you are looking for a high quality, more expensive boot, we would recommend looking for a boot with composite toe cap and midsole. However, steel toe cap boots are still very much as safe and often cheaper than boots with a composite toe cap and midsole so these are a great option for those with a budget and they are available in a huge range of market leading products. 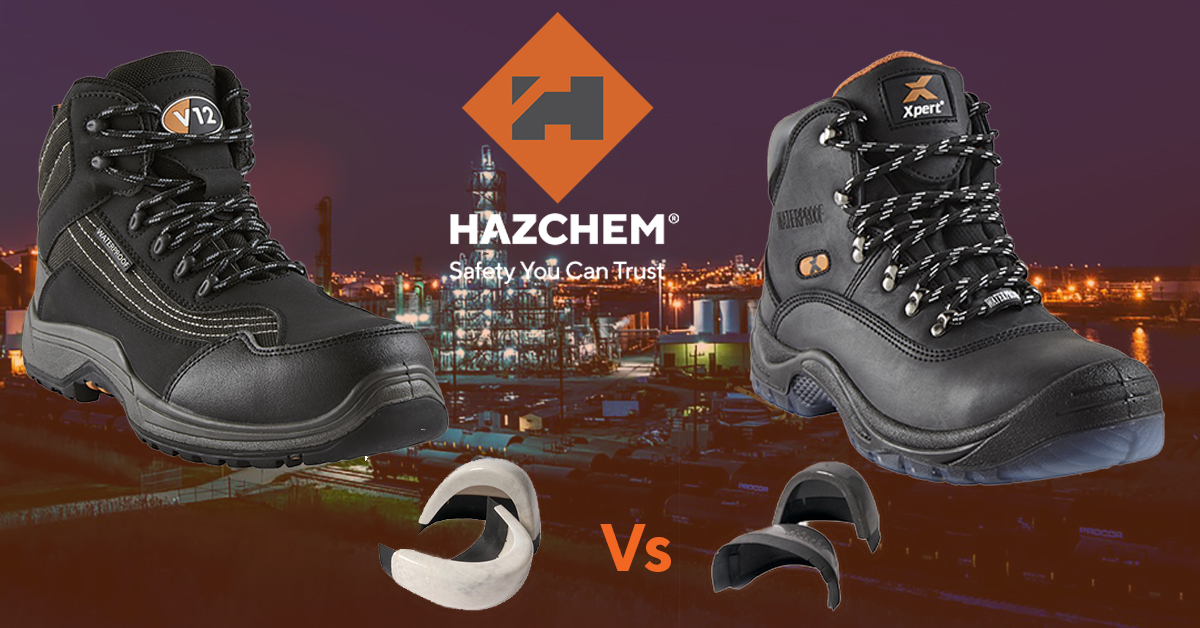 Powered by Convert Plus
Hello There!
Did you know...
A HAZTEC® or ORKA® Technical Workwear (FR, ARC) garment is dispatched every 30 seconds!
& tell us about your wearer experience

That's it - just opt-in for the usual 3rd party cookies and consent. OK, I'M IN!
Go to Top